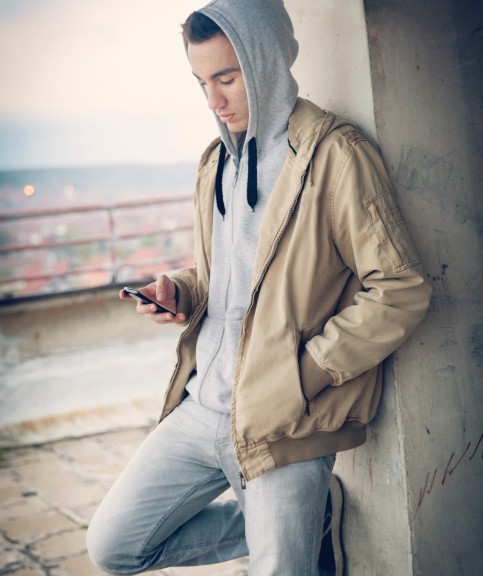 School nurses have become the unlikely drivers of a communications revolution in Leicestershire with a mobile app aimed at children and young people.

When the NHS in Leicestershire launched a school students’ text messaging consultation service earlier this year, healthcare professionals were unprepared for what followed.

With a new found freedom to express their personal problems, teenagers in schools across the county quickly adapted to this new form of confidential communications. Surprisingly for many school nurses, students opened up about their feelings far more than they had ever done before.

They texted freely about issues involving contraception, mental health and even substance misuse. Within months a raft of concerns involving mental health and emotional wellbeing were being uncovered by nurses. Teenage boys, in particular, were far more likely to text about their problems than see the nurse at school.

Through a combination of chance and design, healthcare professionals at the NHS in Leicestershire were able to communicate with teenagers in a way unthinkable only a few months earlier.

The messaging service works through an app called ChatHealth, which is downloaded by nurses on smart phones and tablets. They then use the app as a kind of secure storage repository for students’ texts. In its initial phase, it was made available to some 100,000 students aged 11-19 in Leicestershire since April.

These small few bytes of technology have revolutionised the means by which secondary school students can keep in touch with school nurses, day or night, to discuss their health problems. Meanwhile, the school nurses in the county have suddenly found themselves – often unwittingly – leading a sea change in young people’s healthcare outcomes and safeguarding issues.

If the school nurses are the revolution’s dedicated foot soldiers, then Jimmy Endicott, ChatHealth project manager at Leicestershire Partnership NHS Trust, is the movement’s evangelist, strategist and spokesperson all rolled into one.

He’s an enthusiastic proponent of using technology to improve the mental and physical wellbeing of children. It was Mr Endicott’s team that pioneered the app after making exhaustive studies into how children and young people communicate digitally. This also included a 12-month pilot to see how it worked for students and nurses before launching.

“Kids at school are leading the communications revolution,” he said. “More than 80% of them own a smartphone. Mobile is now responsible for every aspect of their lives, from talking to each other and listening to music, to TV and shopping.”

“We wanted school nurses to be available on that platform. Some of these children are vulnerable and difficult to engage with and we knew that if we couldn’t reach them through a channel they understood and used, they would disengage with healthcare altogether.”

Mr Endicott and the team looked at the different social media channels and platforms used by children and decided the most frequently used – and least likely to change with teenage fashions – was text messaging.

The idea was to use an app that guaranteed security. This would give the children peace of mind that their texts were not going to be intercepted by anyone other than the school nurse.

“Texting is now woven into our daily lives,” Mr Endicott said. “The young people tell us they feel more comfortable talking to adults in this way. Some want to see a school nurse, while others don’t want a face-to-face meeting. They choose to do it “behind the screen”, as they’re calling it. Teenage boys, in particular, are using this service and school nurses are now engaging with them far more than before.”

He said that overall feedback from students had been overwhelmingly positive. Most say they are more likely to ask for health support from a healthcare professional now they can ask questions anonymously.

The Trust’s next steps – with Mr Endicott at the helm – is to pilot a ChatHealth app for students, so both apps can link up, and introduce virtual clinics using video calling centres in schools. This would work in a similar way to existing Skype or Google Hangout video calls, where there will be one-to-one video consultations with a nurse.

Moreover, with virtual clinics the student will not have to be at school to make the call – they could be calling from anywhere in the county on their phone or tablet. Although Mr Endicott denies this is being trialled as a money saving venture, the savings on nurses’ time and consequently the NHS’s resources in staff and costs are obvious.

“The virtual clinics are in addition to seeing a school nurse,” he says. “So the student could Skype the school nurse from anywhere. This has the added benefit of saving time for the nurse. Leicestershire is a largely rural county and often they will spend an hour driving to a consultation. The virtual clinic will obviously cut down on that journey. In saving that time she can have another consultation, so increasing her presence. “

Another innovation set for piloting is a web-based peer-to-peer open forum for children and young people to communicate with each other and with a nurse who will chair the forum at set times.

All of these innovations are what Mr Endicott calls the diffusion of technology. Looking at different types of technology and experimenting with different tools and channels. Some will work, so will not. He eschews the current popularity of Tweetchats or whatsapp as the best tools for communicating.

“With messaging we can mitigate against the risk. It’s a safe network,” he says. “If we provide nurses and students with Tweetchats we’d have to start to looking in more depth at safety and the risks involved.

“You have to understand that teenagers are tribal about social media. Most no longer use Facebook because they’re mums and dads use it. Very few really use Twitter much. It’s cool to find that next big thing. It’s what teenagers have done in fashion. Also different students use different apps often depending on which school they’re at. So in one school a friendship group will be using Google Hangouts, in another whatsapp and in another Instagram.

ChatHealth has already caused ripples across healthcare in England and Wales, with other healthcare organisations eager to set up similar pilots. In recognition of his and the Trust’s work, Mr Endicott recently collected an Innovation in Healthcare award for the app.  Meanwhile, Caroline Palmer, a school nurse who worked with him on launching ChatHealth, was given a Queen’s Nurse honour for helping to transform the way young people access NHS healthcare.

Apart from the hugely positive response by students to the app, Mr Endicott and his colleagues are equally surprised by the enthusiastic take up of ChatHealth by local school nurses. “The nurses are fired up and like finding new ways to communicate with students on their terms,” Mr Endicott says. “For services for children and young people, they listen to what they want and acknowledge how they communicate. All of us know we can’t bury our heads in the sand. If we don’t listen then we wouldn’t be doing our jobs properly.”