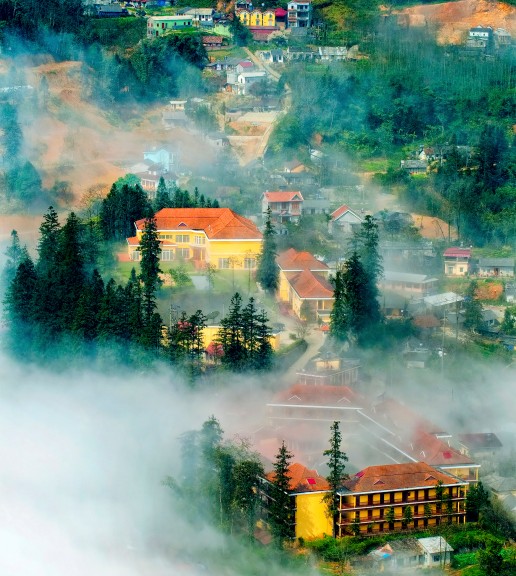 Conditions were made worse when street hawkers on each station the train stopped at scrambled aboard in pursuit of my tourist dollars.  Cramming into the stifling cabin, they pressed me to buy anything from bitter green tea and fermented pork buns to fake bottled water, cigarettes with names like Marco Polo (which had branding identical to Marlboro) and prostitutes.  “Madam boom boom. No 1. Yes?” an unkempt streetkid  grinned while cleaning my shoes.  I gave him 2,000 dong for the shoes and told him I’d forego Madam boom boom thanks.

Meanwhile, to add to the mayhem, other passengers began squeezing their way into the cabin past the street peddlers.  In another country there would have been arguments and even fisticuffs, but here all was disorganised calm with not a word uttered in annoyance as arms and legs flailed wildly to get an audience with the foreign passengers.  The scene resembled a Marx Brothers farce:  eventually the corridors became so congested as queues lined up outside my cabin that a guard had to be called in to disperse the crowds.

Still, these lumbering Soviet trains are state of the art luxury compared to the rail network’s previous beasts of burden.  In the recent past, much of the rail traffic was still being hauled by giant, unpredictable Chinese-built steam engines.

In fact, it was on one of these antiques that I spent 7 bone-jarring hours in 1994 riding on a goods train to Haiphong at the back in the guard’s carriage.  Every few miles we’d stop because of a lack of water or lack of coal, while Vietnamese toddlers flocked across the track to gawp at the foreigner as  the older girls tried to sell me anything from chewing gum to themselves.

“What’s a foreigner doing on such a shit train,” one young girl asked my translator, a Vietnamese English student who found it equally incomprehensible that I was  willingly taking such a journey. “I have now been in the hell,” he later grumbled as we fell out of the guard’s carriage at Haiphong. It was then that I realised the romance of steam is a peculiarly English phenomenon. I knew it was a waste of time explaining to him that in England volunteers give up their spare time to operate such old engines.

The driver of the metal behemoth, however, was a steam enthusiast and invited me onto the footplate proudly describing how he’d dodged American bombers during the Vietnam War by camouflaging the engine with trees.

“Sometimes we had to get out and rebuild the track where they’d destroyed it,”  he smiled. He was a good natured old fellow and looked genuinely sorry that all the fighting was over.  It was old Vietnamese like him that made you realise what a formidably tough race these people are.  He’d driven the old beast for 40-odd years, a back-breaking task feeding a furnace in weather that often reached 45 degrees and averaged humidity of saturation levels.

To add to this misery he was regularly bombed and shot at for 20 years, during the French and American wars that spanned 30 years from 1945-75.  Yet to see him drive the engine, blowing his whistle and tugging on strong Vietnamese cigarettes, he looked like a contented Casey Jones tootling along without a care.  After just 15 minutes on the footplate, however, I fled back to the guard’s wagon, soot-black and stinking of coal  dust and steam.

The railway authorities had been acutely embarrassed about these lumbering old machines for years and when I first enquired about travelling by one I was told they didn’t exist.  I remonstrated by saying that one was currently passing by my window as we spoke on the telephone, but it was a week before the authorities finally admitted they still used steam engines.  And it was another week before they admitted that half of their rolling stock was still hauled by steam engines.  In Vietnam seeing is not necessarily believing.

This time around, Vietnam railways had made definite improvements.  My diesel-driven midnight sleeper was an oasis of peace after the bellows, screeches and staccato jump-starts of the old Chinese model.  My cabin may have been no larger than a monastic cell, but the journey itself was a smooth one.

Lao Cai is a military-run border town and our train was full of soldiers going back to the north after a break in Hanoi.  My cabin comprised young military personnel one of whom was a female officer.  In any other country she could have been a model, here she was probably earning $20 a month guarding Vietnam’s northern borders from the predatory Chinese.

As she entered the cabin she had the hard stare of a Vietnamese officer, decked out in drab olive green, her peaked cap shadowing her dark eyes.  But as she relaxed, taking off her cap, glasses and letting her long, black hair fall down to her waist, she blossomed into a classical oriental beauty, the kind of Vietnamese woman that so enraptured Frenchmen and Americans in the past.

The Vietnamese can sleep anywhere at anytime and within moments of the train pulling out of Hanoi station, all the soldiers were fast asleep as if tucked up in some sumptuous four poster with silk quilts.  I spent the entire 11-hour journey wide awake occasionally looking over at the sleeping beauty and cursing my insomnia.

At 7 am the train hauled me into Lao Cai station, it was from here that I would make my way to Sapa, the old French Colonial hill station far up in the mountains.  Exhausted, haggard and desperate to avoid the gathering crowd of hawkers, I made an immediate dash up the platform as they pursued me yelling: “Postcards, cigarettes, Marco Polo? You want massage? Madam boom boom?”

Outside the station I ran to a waiting minibus, passing the pursuing banana and rambutan hawkers, who had obviously been waiting for the first train to arrive since dawn.  The weather was fresh and alpine, far removed from the fetid humidity of the lowlands and as the bus headed out of Lao Cai, we passed a little rump of China sprouting up out of a headland in the river.

With its new glass fronted office blocks, satellite antennae and newly built roads, it was an extraordinary sight set against the rough and tumble poverty of Vietnam.  Like seeing a neighbour flaunt his wealth after winning the lottery.  “They only build like that to intimidate us,” one Vietnamese passenger sneered in English.  “The rest of their country is poor.”  As he spoke a dozen Chinese railway workers, no more than 50 yards away on the other side of the border, starting waving cheerfully at us as we ambled by.  Obviously inquisitive to see a European face, they kept up their salutations far off into the distance.  The Vietnamese, as ever, stared nonchalantly ahead at the dark mountains confronting us. They did not wave .

The road up to Sapa is a steep, dangerous one, up through sheer escarpments and hanging valleys after which the land tumbles down and evens out into huge basins dotted with badly built wooden homes owned by Vietnamese settlers.  The Vietnamese are not highland people by nature. They dislike the infertile mountain terrain and they dislike the forests and the unpredictable weather.

But above all they are wary of the tribal people that live high up away from the coastal plains, a people they’ve spent hundreds of years trying to subdue.  Almost all of Vietnam’s highlands have been traditionally settled by ethnic minorities.  It’s only during the past few decades that the Vietnamese settlers have ventured into these remote regions, encouraged by a post-war government desperate to take the pressure off the crowded lowlands. As traders, they seldom venture into the heart of the bleak countryside around them, preferring to build their wooden shacks along the arteries used by the smuggling convoys that trade in illicit goods between Vietnam and China.

Up here on the high mountain passes, these old East German-built IFA smuggling trucks are the undisputed kings of the road.  Day and night they sail down the steep inclines out from the porous borderlands, often careering along in neutral to save on precious petrol.  This surplus is then syphoned off to petrol traders along the way for a few thousand dong.  To meet one of these ungainly, ill maintained giants head-on is a truly terrifying experience.

Most lurch precariously from side to side as they thunder along and almost all of them have a difficult time stopping with their faulty brakes.  Night driving is particularly perilous as most trucks turn their lights off to attract less attention to their smuggled loads.  Seated at the back of the minibus, which was struggling to cope with the steep gradients, I felt very vulnerable indeed. A yawning precipice to our left and lunatic smugglers, half drunk on rice wine and sleeplessness, racing straight towards us.

We gradually crept further up through the low clouds and mist, the higher mountain ranges and plateaux taking on a dark olive, almost sinister sheen.  In this unforgiving place even the hardy Vietnamese traders, living in makeshift wooden trading posts, grow more scattered and isolated.  We had now entered Black Hmong territory and drove at a beleaguered crawl along the damp, dangerous road.  Small groups of shy Hmong men and women emerged from the mist, trudging along the roadside, labouring under the weight of rush baskets strapped to their backs and crammed with wood.  Some of them glanced up curiously as we passed, others marched on stoically disappearing onto rough tracks leading to the vast valley floor.

Ethnically similar to Mongolians, the Black Hmong are a very different race to the Vietnamese.  All standing less than five feet tall, they were wearing dark indigo jackets, skirts or trousers edged with silver brocade.  The women also wore indigo puttees wound around their calves, their necks and arms shimmered with necklaces and bangles.  Their ears hung limp with huge silver ear-rings some six inches in diameter.

Below on the remote, inaccessible flat valley bottom Hmong villages huddled together, their stout, wattle and daub huts contrasting sharply with the desultory wooden Vietnamese trading posts along the highway.  Before long we entered the outskirts of Sapa, the only Vietnamese town in this part of the Tonkinese Alps.  As we drew closer I could just about make out the settlement, hidden in low dark cloud and dwarfed by the great peaks of Fansipan Mountain soaring up into the muggy heavens.  After 11 hours by train and a further three hours crawling along wet, treacherous roads, Sapa was a stark, remote, beautiful sight, like a dramatic El Greco landscape threatened by the gathering storm.