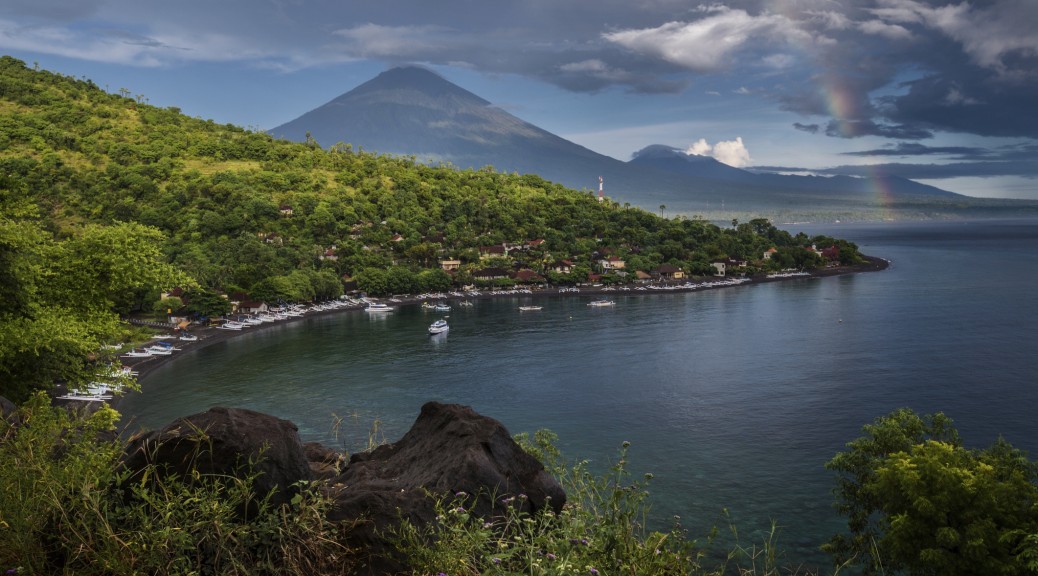 At first glance Indonesia, with its ethnic and religious tensions, is probably not the ideal destination for a relaxing, trouble-free holiday. For two weeks of peace and quiet surely there must be other places to go, or as my doctor put it as he syringed typhoid into my arm: “Have you ever considered Bournemouth?”

But for those willing to fly half way round the world, heaven is out there and its name is Lombok. This tiny island off the southern tip of Bali is a grand exotic slice of overwhelming, unhurried calm, far from the problems that haunt other islands in the Indonesian archipelago. Forget about the candy floss and cola on a packed southern English beach, on Lombok it’s fresh coconuts and mango juice, palm-lined beaches and ethereal gong music.

The island is a gorgeously odd mix of parched desert and tropical rain-forest, shock-white beaches and terraced mountains that rise up to a dormant volcano 3,700 metres high. It’s this magnificent volcano you first glimpse as you circle the island in the tiny twin-prop taxi planes that fly tourists in from Bali.

The tiny airstrip is in the island’s capital, Mataram, which resembles more a friendly tropical village than an administrative centre. The town’s streets are lined with market hawkers selling anything from pungent herbs and spices to tobacco, the island’s main cash crop.

Amid the cacophony of commerce, small, brightly decorated ponies and traps, called cidomos, canter past, their tinkling bells sounding their imminent arrival and departure. And swirling around in the tropical heat currents above the street scenes are the evocative calls to prayer by the holy muezzins in the local mosques. It may all sound chaotic, but it’s everything is conducted with the utmost ease – life is slow and easy and time is flexible.

Lombok is a predominantly Muslim island, unlike nearby Hindu Bali, and mosques dot the landscape like brightly coloured mushrooms sprouting from evergreen forests. But it’s a very relaxed version of Islam, combined with many of the traditional ancestor and spirit religions that predate the islanders’ conversion by Arab traders.

The lush north of the island is the most popular area to stay, with the town of Senggigi being the focal point. This is also the island’s most popular beach area and small hotels and guest houses nestle along the waterfront. Clearly local developers have big ideas for the town judging by many of the building sites, but for the moment it’s still a settlement of little cafes, restaurants, the odd bar and shops selling local art and crafts.

Traditional handicrafts are part of the culture in much of Indonesia and Lombok is no exception. Much of the work centres around intricately wood-carved primitivist sculptures and shadow play puppets, but there’s also a long tradition on the island of weaving and pottery. Add to this antiques with a very European flavour (the Dutch colonised the country for 300 years) and you’ll probably spend a good deal of your time in some of the many small handicraft villages and shops that are all over the island.

The best way to see Lombok is to hire a motor bike. The roads are mostly deserted apart from the odd cidomo, and in the mountainous north even they are rare.

Driving into the interior, you pass mile after mile of lush rainforest hugging the base of the volcano. The area is thick with monkeys, often playing in the road as you pass. Small settlements of wooden raised homes lay partially hidden in the thick, lush jungle. Families busy themselves in the nearby rice and tobacco fields at the foot of the mountains, while children race into the road with your approach waving frantically: foreign tourists are still a rarity in many parts of the island.

Northern Lombok is also great trekking country and local guides take regular hiking tours around the top of the volcano, called Mount Rinjani. These are serious treks into the heart of darkness, through the jungle and up onto the perimeter, and the tours last up to three days. But for the more faint-hearted there are one day hikes that take you around the rim of the beast so you can be back home for tea.

Lombok is surrounded by pearl-white coral reefs and ocean thick with fish. For a price, gnarled old fishermen sail you out to the nearby Gili islands for a day of diving and fishing. These wily old seamen often try to charge a small fortune for a day trip, so it’s worth haggling before the trip. The islands are small, tropical outcrops with gloriously empty beaches. There’s also a good surf, and Aussie surfers are only now just discovering the place.

Back on Lombok, further south, the island takes on a very different complexion. Apparently, Lombok is a geographical anomaly. Much of the flora and fauna on the island is related more to Australia than Asia and nowhere is this stark difference more defined than the southern half of the island. From jungle and mountains, the island suddenly turns into stark, bright desert. The rain-forests disappear into miles of sand dunes, with dilapidated huts selling cold drinks and local food. It’s a scene from a spaghetti western where men slouch around supping beer and swatting flies in a lethargic torpor. It’s a startling regional difference and the drive between north and south takes no more than two hours.

Kuta beach seems to run along much of the southern coast. This is a huge expanse of shallow water amid sprawling dunes and rocky islets. Curiously the shallow bay is also popular with thousands of islanders who cultivate tons of seaweed – another big cash crop. The sight of all these people suddenly appearing out of nowhere in the middle of a deserted landscape is a truly bizarre sight.

But regardless of the fascinating culture of these isolated people, Lombok ultimately offers you the luxury of escaping totally from the outside world. Most small guest houses have self contained villas designed on traditional island architecture, with carved wooden arches and garuda idols set amid clusters of frangipangi trees and fan palms. Many don’t have TVs but instead bring in dancers and musicians for the evening playing the fragile, hypnotic local music that could be easily repackaged and sold in new age shops under the section ‘calm’.

For the islanders of Lombok time may be flexible, but for me it didn’t exist at all. As a Dutch tourist told me: “This island is one of Asia’s last great secrets. I’m so worried it will one day become another Bali.” Things could be far worse, but I sincerely hope not.

First published in The Times, 1998