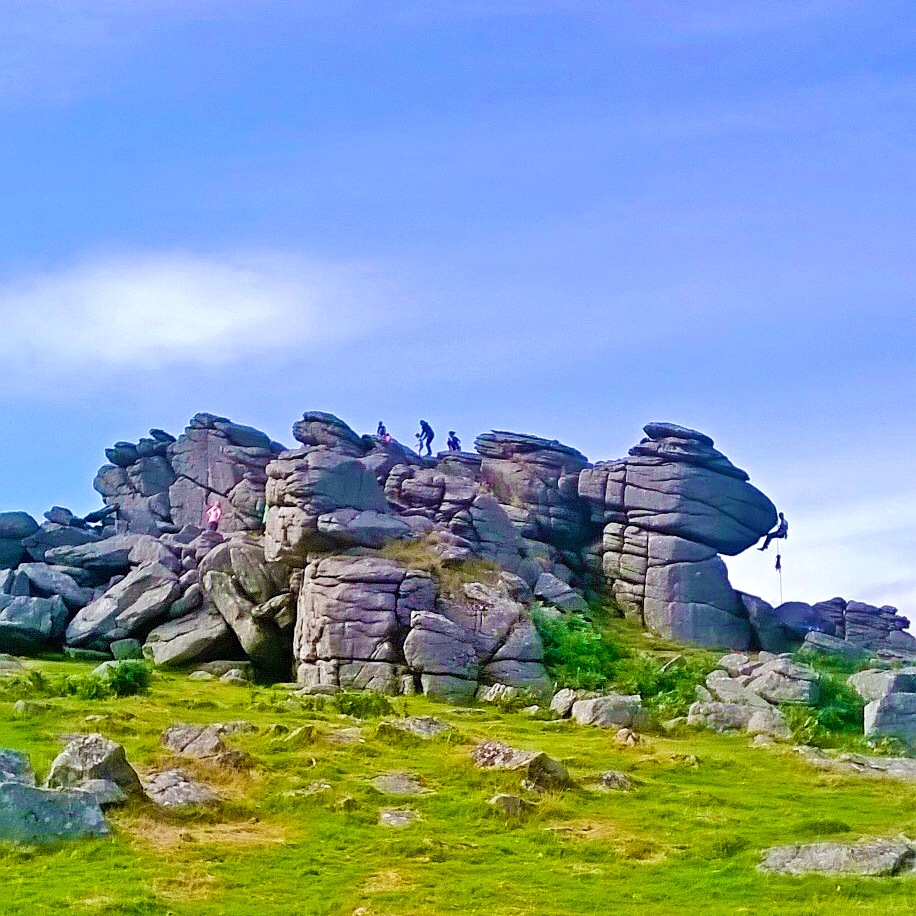 Today this part of Dartmoor is probably better known for well booted ramblers following the abandoned granite tramway from nearby Haytor and scaling the granite pile of Houndtor.

Meanwhile, some 150 metres down in the valley below the tor is the ancient (and often oddly overlooked) abandoned hamlet of Houndtor village.

This  is a medieval cluster of longhouses and barns dating back 1000 years. It’s a sodden, sheltered slope of land where people eked out a living ploughing strips of topsoil for hundreds of years,  corralling cattle into their homes, hunting wild pigs and eventually being wiped out by the Black Death in the 14th century.  Or so it goes.

The site was hidden from view for 700 years before an earnest amateur moorland digger, the redoubtable Mrs E Minter (the Agatha Christie of Dartmoor archaeology), decided to dig it up in the early 1960s.  The remains of her endeavours, mainly piles of stones, are all around the site even now. According to English Heritage, Houndtor Village is one of the few settlements of its type anywhere in Britain and is in line for protected monument status

You can still sit on the walls, tramp through the houses, and even idle in the ancient privy – though probably not for too much longer.

The settlement is made of drystone rock, a sort of medieval brick without mortar, with loose granite holding it all together. Since the days of Mrs Minter the structures have been deteriorating at an alarming rate. So get there before it either vanishes beneath rambler boots or is hidden behind barbed wire fences (probably the latter).

In the days of chopper bicycles I used to labour up the steep hills to eat my packed lunch amid the ruins of the village. Then run down the hill and splash around in the springs and river cutting through the eerily silent valley below with its huge red and white fly agaric mushrooms and midget trees covered in moss.

I still drive to this spot as often as time and life will allow – in the freezing depths of winter or  in the beautiful mid summer when the kaleidoscopic gorse stretches across the moorland between Houndtor and Haytor . A carpet of blues, yellows and purples, softening the landscape and bringing colour to the steely granite and ruined dwellings.